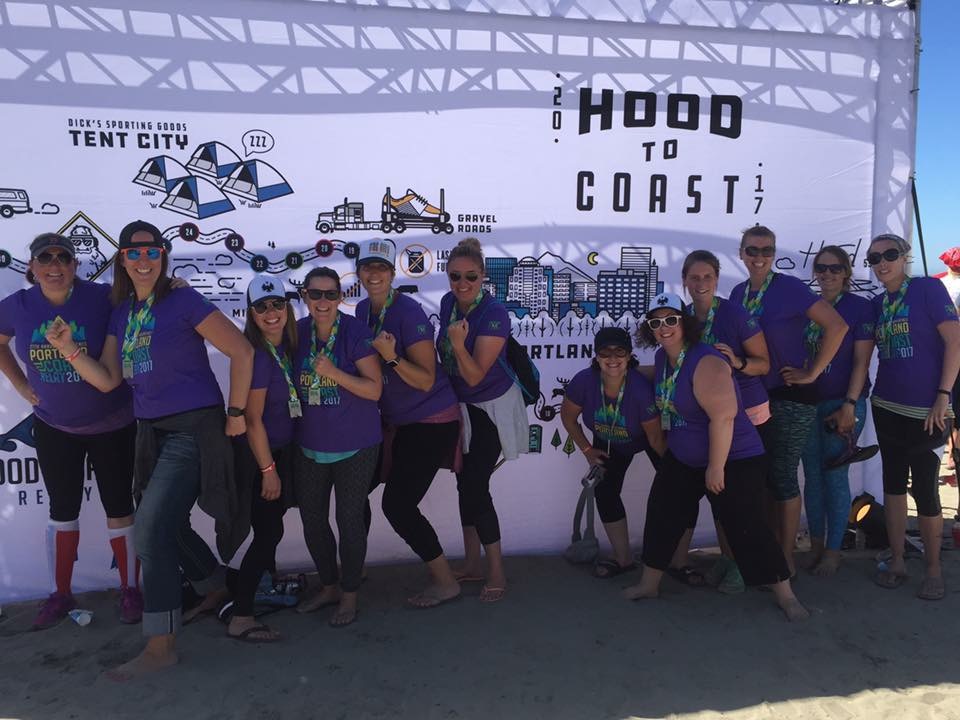 This is going to be a super-duper long post.  A three-parter, even. A series, if you will.  Because, this weekend I did a thing. And it was a big and brave thing.  This past Friday and Saturday, I participated in the annual Portland to Coast relay walk.

Maybe that doesn’t seem like a big and brave thing to you or to some other people. I walked ten and a half miles and stayed up all night.  Big whoop. But this isn’t some other people’s story.  This is my story, a walk in my very own shoes, so to speak. And for me, this was really big and brave.  And in the process of doing this big and brave thing, I learned some even bigger, braver, and more wonderful things about myself and about the sacred work of challenging ourselves, facing down our demons, and uncovering the truth about ourselves that can too easily become buried under the lies we’ve come to believe about ourselves.

Portland to Coast is something I’ve always kind of wanted to do.  I have heard the whole Hood to Coast experience is amazing, and I do love to walk.  Put some headphones on me with my jams playing and I will walk it out all. Day. Long.  So when my friend Tara posted on FB that her Portland to Coast team needed a few more members, I hesitated about 30 seconds, ran it by my husband (one cannot make away-for-a-weekend choices without the other parent fully on board when your kids are 3 and 5), and said, “ME! ME! PICK ME!”  I PayPalled her some dinero and all of a sudden, I was committed to doing a thing.  A walk. A relay walk.  No big deal, right?

Here’s the thing, though.  I had never met Tara.  We are “internet friends” who had connected through Project Mother, but never actually met in person.  I also had never met anyone else on the team before. And I would be spending 36 hours in a van with these people. And also, I had never actually done any kind of a race before. Like, ever. Not even a 5k turkey trot. Matter fact, I pretty much don’t do athleticky things. My idea of participation in sports involves a carefully-curated Beaver game day outfit, a frosty beverage, and lots and lots of watching.

But more than that, I’ve always identified as DECIDEDLY un-athletic, even to the point of being a little scared of pushing myself.  When I was 13, I was diagnosed with a thyroid disorder, Graves Disease, or autoimmune-induced hyperthyroidism.  By the time they finally figured out what was going on, I was 5’3″ and weighed only 75 lbs, my resting pulse was 140, and I was getting lightheaded in dressing rooms trying on clothes.  As a matter of fact, the day that finally propelled us to a diagnosis began with a morning walk with my mom and me getting so lightheaded that had to sit and wait under a bush for her to run home and get the car to come get me- and also call the doctor and say, “We’ll be right over.  We need answers this time.”

Those were some very formative years for me, the years in which other kids were playing sports and doing athletic activities, and I was almost passing out from just walking.  Even after I began treatment and my body started to normalize, I was still fragile, easily fatigued, easily lightheaded.  Gym class was a nightmare. My body, already a long and lean type by virtue of genetics, also didn’t develop muscle well or even normally in that season as my out-of-control Graves-driven metabolism consumed every ounce of available matter to feed itself.  This rendered me also less physically strong than other kids my age and with my long limbs without an ounce of fat on them, I was horrifically awkward trying just about anything.  So I stuck with choir and theater and let sports be for the other kids.

Even though my body functions perfectly normally today and I live with no lingering symptoms as long as my meds are right (I did radiation treatment in my early 20’s and have been on a maintenance dose of Synthroid ever since) the misgivings I carried from that season have never really gone away. To this day I’m intimidated as heck of pushing myself athletically, both for fear I’ll be unable to do the things others can and for fear that I’ll, you know, end up passing out.  It’s hard to release that self-preservation instinct that kicks in when I really start pushing myself and feeling the endorphins kick up, that wave of panic that the world is about to dark and I need to back off.   So my self-identification as a bit of a weakling and my avoidance of sportsing and athleticizing has always run much deeper than, “It’s just not my thing.”

So I started training.  If I was going to do this, I was going to do it right and I was DETERMINED not to be the weakest link on this team of women I had never even met.  I told myself that if I couldn’t walk under a 15 minute mile, I might as well not even show up.  On my first official training walk, I did three miles at that pace and could barely walk the next day.  Plus it became evident early only that both my lower back and a tendon on the inside of my right knee had the potential to be problematic.  But I walked, I lifted weights, and while I certainly could (and possibly should) have trained harder, I did enough to give myself a solid shot and I went into the race stronger and more ready than I had been when I first signed up.

The week of the race, Tara asked all of us for updated pace times and I told her I was confident I could do my legs at a 14.5 minute pace.   At 3:30 on race day morning, my alarm went off, I drove across Portland to meet my teammates for the first time and get in a van with them for thirty-six hours.  We loaded up the van, headed to the start downtown, and at 6:15, one of my five new besties, Noelle, hit the road- and we were off.  Here.  Went. Nothing. Y’all.

This is where I conclude Part 1.  Standing at the starting line, ready to do the danged thing- but with no clue how it was going to go.  Click here to read part 2.

3 thoughts on “My Big, Brave Portland to Coast Adventure, Part 1”