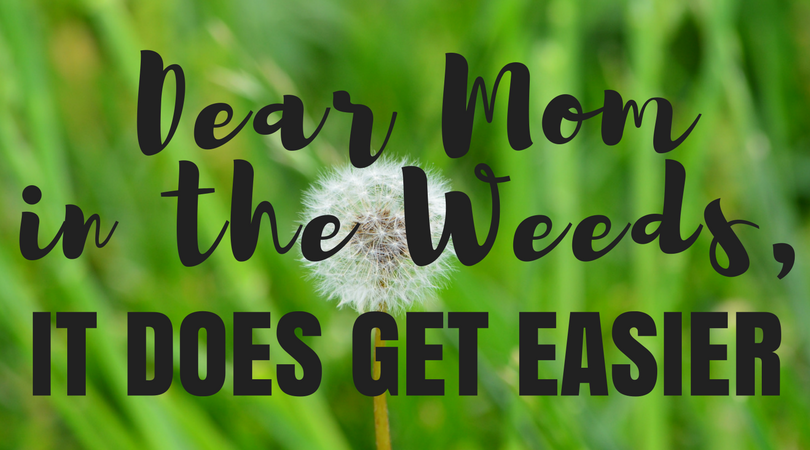 Dear Mom in the Weeds,

My sweet sister who is exhausted, sleep-deprived, and overworked from chasing a toddler, managing preschool tantrums, doing all things for all people.

You’ll never guess what.   OK…are you ready for this?

IT! ACTUALLY! DOES! GET! EASIER!

I mean, they told me. They promised me.  But I did not believe them because…well, when you’re in the weeds, you think the day will never come.  I feel like it’s a coping mechanism of sorts, we don’t dare to think of a day when things will be different because it’s like being on a diet and thinking of a piece of cheesecake. We just have to pretend the cheesecake doesn’t exist to get through it.

But one day, you turn around and something got better. Got easier.

This week, I took my kindergartener to the pool to swim.  I watched (as in sat on a bench next to the pool and WATCHED, like an actual adult) him frolic in the shallow end, practicing his swimming skills and splashing and playing with the other kids. Once I actually did get in the pool, he jumped in and swam to me a couple of times. He did not pull down my bathing suit top in a fit of fearful clinginess even once. It was delightful.

After about an hour, we got out and went in to shower and get dressed to go home.  As he sat getting himself dressed and I went over to dry our suits and put away our towels, I had a deja vu moment, my mind traveling back to a much different time in that exact place.

Ironically, was two years ago tomorrow that I wrote this in a post here:

“I am exactly the right mom for my kids, I am exactly the right mom for my kids, I am exactly the right mom for my kids.  I’m telling myself that over and over right now because Mister Cameron, who just turned four, had a screaming fit in the locker room of our gym yesterday after swimming because I wouldn’t get him dressed.  He had a screaming and crying fit IN! PUBLIC! because I was busy so scrambling to dress myself that I couldn’t do something for him that a couple of months ago he would get furious with me for even attempting to help him with.  And what’s even harder for me is that I couldn’t reach him once he got himself going.  Nothing I tried worked until I had to give in and dress him myself and then walk him out of the locker room screaming.  The older woman walking out ahead of us was so startled by him that she gasped and took the good Lord’s name in vain while looking daggers over her shoulder.  In her defense, I don’t think she realized that this was a child whose poor mother was doing the best she could, I think she heard a yell and assumed he was unsupervised- because it’s only logical that a supervised child would not scream like that.  Of course, one could argue that he WAS unsupervised because there certainly was nobody present whose authority and direction he was responding to.”

The contrast between that moment and the one I found myself in was staggering- and it happened when I wasn’t even looking.  Memories came flooding back of earlier trips to the pool with a barely-walking baby and an uncooperative preschooler, neither of them the least bit independent.  How tension would creep into my bones when I knew the time was coming to extract us all from the pool- would there be a meltdown? What would happen in the showers?  I would go home exhausted.

But while I wasn’t looking, things got better. The kids have matured, gotten more independent, they have learned the going-to-the-pool drill, and those trips are more of a joy than a chore these days.

It’s easy to lose sight of the things that have gotten better in the wake of the whole slew of NEW problems that inevitably crop up as the kids grow. Now our meltdowns happen in the mornings getting ready for kindergarten. Every. Stinking Day. This season of parenting isn’t necessarily any easier than that one, it’s just challenging and taxing and frustrating in new and different ways.

But we have GOT to stop and recognize the victories, the moments when it has gotten better.

And it will.  They always warn you that one day you’ll turn around and your kids will be bigger, and it’s true. But it’s not entirely a bad thing. You’ll also turn around one day and it’ll be easier.

I need that reassurance because there are days (MOST days) when I myself am still in the weeds. My kids are 6 and 3 1/2, it’s still a lot of work. So I guess this is a letter to myself as much as to you.

This too shall pass.

Note:  My two babies are both developmentally typical kids with no medical issues or concerns.  I know many a mom for whom it either DOESN’T get easier or the progress moves at a snail’s pace due to the unique challenges their kiddos and their families face.  So as we count our blessings, let’s also hold in prayer those moms whose workloads and worry-loads don’t lessen at the same rate that ours do and be ready to show up to support them in any way we can. Because it’s what we do.