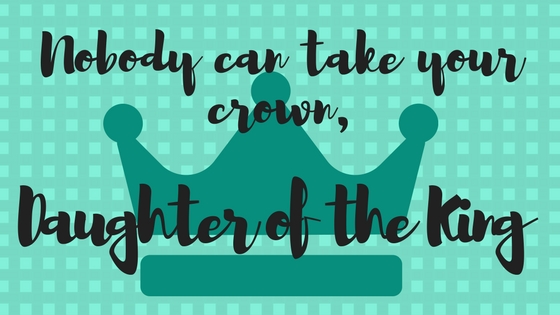 It happens to all of us at some time or another.

Sometimes it’s unintentional, it could be that they unwittingly touched a nerve that triggered our insecurities

And sometimes it is intentional.  When the enemy gets in people’s ears, whispering lies  that they are “less than,” they may try to soothe the ache by putting us down to make themselves feel like they are better than someone.

But the common theme is the same:  In that moment, the image of God in us gets obscured. Someone doesn’t acknowledge the Imago Dei in us, we lose sight of it in ourselves, and our crown feels like it slips a little.

But the thing about God’s truth is that it is ALWAYS true.

NOTHING changes our status as Daughters of the King.  Nobody can take it from us, not even ourselves.

Just because someone else doesn’t recognize it doesn’t mean it’s not true.

Just because WE don’t recognize it doesn’t mean it’s not true.

THIS is the truth that is waiting for us when we align our hearts with His and see ourselves and others through a Kingdom lens:

See how very much our Father loves us, for he calls us his children, and that is what we are! But the people who belong to this world don’t recognize that we are God’s children because they don’t know him.

So when you feel that crown starting to slip, run as fast as you can to your Father the King. Whether it’s coming from someone else or just your own insecurities that are making you feel “less than,” lay it at His feet and let Him flood you with His truth.

You are both created and called by your Father in Heaven, a chosen daughter of the King.  Your worth is in Him and He is worth more than everything.

You were crowned by the King of Kings, so NOBODY can take your crown.

2 thoughts on “Nobody Can Take Your Crown, Daughter of the King”