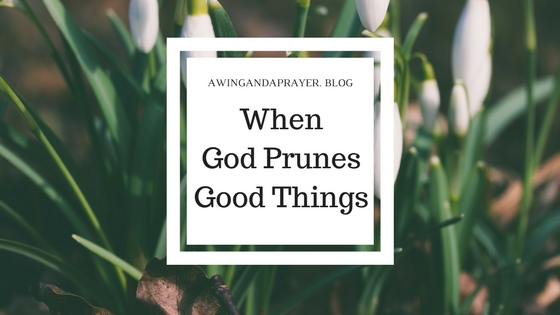 To every thing there is a season, and a time to every purpose under the heaven.

Spring has (FINALLY!!!) sprung here in the Willamette Valley of Oregon.  Trees are leafing out, flowers are blooming, people are sneezing, and we’ve all begun sprucing up our yards.  This year,  Jeff and I decided it was time to stop messin’ around and hired a crew to come in and basically lay waste to our front yard.  The weeds were pulled, the grass was edged, the shrubs were trimmed.  But also, some stuff that we  (or the previous owners) had planted on purpose got ripped out as well, things we didn’t like, that were hard to keep up, looked messy, even things we were just kind of “meh” about.  Right now, our front yard looks neat, but a little barren as it waits for whatever we’re going to do next- and frankly, we haven’t even gotten that far yet. We’re gonna plant stuff, that’s about all we know.

As I watched this process unfold over the course of a few hours on a rainy Friday morning, it jogged something in my mind, a memory of what the past year of my life has looked like.  It was almost exactly a year ago that God began a process in me that looked an awful lot like what was happening in our yard that morning- and left the landscape of my life looking very similar to how our yard looked after the workers left: stripped down, a little empty, and awaiting new planting.

And unlike the workers in our front yard, I did not get to tell God what to take out.  As a matter of fact, He went for some things that I very much wanted to keep- and I fought Him tooth and nail as He took them out, digging in my heels, clinging until my knuckles were white, probably making quite the scene in the process.

I’ve prayed on multiple occasions over the years that God would do in my life the work that Jesus describes in John 15:2:

“He cuts off every branch in me that bears no fruit, while every branch that does bear fruit he prunesa so that it will be even more fruitful.”

But when I pictured God doing the work of pruning, I pictured withered branches, failing bushes, toxic weeds, dead weight. And I envisioned it feeling good, like having burdens lifted or split ends trimmed off. I didn’t imagine Him cutting off vines that still had lush leaves, ripping out shrubs I had planted and tended and even loved. And I didn’t picture it hurting so much.

I didn’t picture Him pruning GOOD things, and yet He did.  They were things that had been life-giving, iron-sharpening, and had changed me for the better in their season.

I have grieved for the things He pruned, I have experienced anger and even betrayal as they’ve been taken, and I have struggled mightily as some toxic weeds like resentment and bitterness have tried to take root in the empty spaces they left behind.

But God is always good, no exceptions. Through this season, He has taught me some new things about the times when He’s moving in ways I don’t understand.

Unlike our yard, which still awaits us getting off our rear ends and planting new things, the empty spaces in my life are beginning to be filled in. Some new things are starting to sprout, some existing things are starting to expand into the empty spaces, all good and beautiful growth that was enabled by the painful pruning season. But some of the landscape is still blank, and much like our yard, it looks and feels little barren as it waits for whatever He’s going to do next. I feel like I’m only seeing a small piece of what He has planned, but my trust muscles were also strengthened through this pruning. I don’t know what He’s got planned, all I know is that He’s going to plant stuff and it’s going to be beautiful.

If this post resonated with you, check out this episode of Annie F. Down’s “That Sounds Fun” podcast featuring Tauren Wells, one of my current favorite musical artists.  In it, Tauren uses the term “divine expiration” to describe the end of the season of things in our lives  I can’t recommend it enough.

One thought on “When God Prunes Good Things”