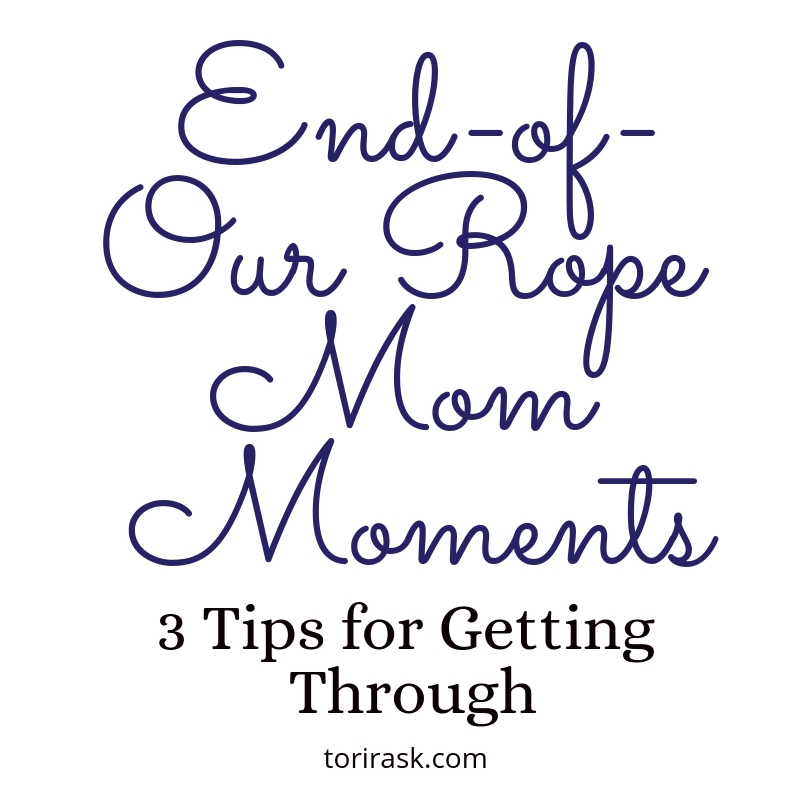 I was getting ready for my daughter’s 4th birthday party when a message came through to our group text from one of my besties.  Her two-year-old daughter had dumped an entire bottle of shampoo out on their bathroom floor.  The frustration and desperation in her voice were palpable.  She was officially at the end of her rope and not even sure how to clean up the mess she was left with- both the shampoo mess and the feelings mess.

It would have been easy enough to just say, “HA-HA!  Aren’t toddlers the BEST?  Enjoy those silly moments, blink and she’ll be in high school and then you’ll miss it!”

And it’s true. It goes by so fast and soon, bottles of shampoo on the floor will be just a memory- heck, we would probably prefer cleaning up shampoo to waiting up on a kid who has broken curfew AGAIN.

But that is NOT the reality when you’re the mom in the moment.

When you are the mom of the kid in a tough season, ANY season, it’s not just a bottle of shampoo that needs to be cleaned up.  It’s not just a vegetable they refuse to eat. It’s not just a meltdown in the grocery store or a forgotten homework assignment or a broken curfew. It’s the latest in a string of major messes and malfunctions you’ve had to mitigate and resolve. You’re exhausted, you’re worn out,  you’re a little worried, and you’re starting to feel like there is something wrong either with you or with your kid and that you are STILL going to be working through this when they graduate high school- if you both make it that far.

When I read my friend’s text and felt her desperation, my brain immediately flashed back to a time when my daughter had just turned three and she colored in marker on someone else’s carpet at a birthday party. Fortunately, it was the home of a close friend and she was totally beyond gracious about it.  Looking back at it now, I can just roll my eyes and think, “Oh my gosh, remember that? Haha, what a memory. Preschoolers, man.”

But back in the actual moment, in that place and time, when my son came downstairs and told me what had happened, when I raced up the stairs and around the corner to see that IT WAS TRUE AND HAD ACTUALLY HAPPENED, it felt like being thrown into an actual pit of despair, frustration, and helplessness.

Baby Girl had been coloring on stuff at home for MONTHS.  We had done everything we could think of- we had given consequences, we had given her a sketchpad for her room and bath crayons for the tub so she could go to town in appropriate ways, she had helped clean the messes, we had hidden the coloring supplies (which isn’t easy to do with an older child in the house), and it would get better for a spell. But then, just when one of us would say, “Hey, Kendall hasn’t colored on the wall in awhile,” purple streaks (her signature color) would appear on a window- and always when she was tired or frustrated, it was a total stress behavior/lashing out thing by this time.

I remember snatching her up and carrying her home in tears (me, not her.  She was showing zero remorse), depositing her on her bed, flopping down on my own and sobbing. In that moment, it felt to the tips of my very toes like I would not only be cleaning coloring off of walls and carpet for the rest of my life, I would ALSO be cleaning up other types of much bigger, badder, and more disastrous messes in her life because I was CLEARLY failing at raising a responsible, functional, NORMAL human being.  GAH!!!!!

Now, not even a year later, we are in a much different place.  She hasn’t colored on the wall in recent memory (she let go of that vice shortly after this incident) and as she grows, responsibility and maturity are slowly creeping in, just enough that I’m starting to think maybe I’m not totally failing her.

I mean, we have other struggles right now to be sure. We have traded wall coloring for epic meltdowns and refusals to eat dinner.  Whatever season YOU happen to be in with your kids, whatever it is that KEEPS HAPPENING and has you exhausted and discouraged, here are three tips to  hold on to when you’re barely holding on.

My prayer for you, for all of us, is that God will give us His grace and mercy to get through the tough moments.  That He will give us the wisdom and strength to do what our kids need to help them through whatever’s going on. That He will give us patience and peace as our kids slowly learn and mature.  That He will surprise and delight us with the little moments of joy that only this very season in our babies’ lives can bring.  May He help us to not miss a moment, even though we may wish the moments away sometimes.  And may we come out the other side glad to be through it, but grateful for having been there.

In case nobody has told you today, you’re a great mom.