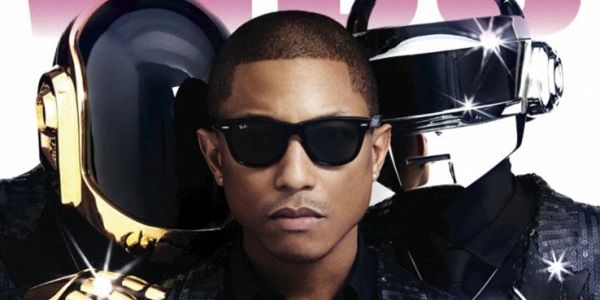 Sometimes, God shows up in the form of Daft Punk and Pharrell Williams.

I mean, maybe not. But hear me out, here.

God has been doing A LOT of work with me this summer in the area of…well, a lot of areas. But they all kind of point to the same thing:  my worth to Him is not tied up in my job performance, I’m not only as valuable as the Important Things I Do For the Kingdom.

I matter to Him because I matter to Him, and He goes with me everywhere- even in the things that I don’t feel are, like, super important Kingdom Work.

I walked into Nordstrom Rack this weekend with knot of dread in the pit of my stomach because I could make you a list a mile long of ways that 41 is better than 21 and dress shopping would not be on that list.  Just, ew.

The automatic doors slid open for me, I walked through them and surveyed the landscape of what would be my own personal gauntlet for the next however long it took me to accomplish the task at hand. I couldn’t see my own face but I imagine I was sporting a lip curl marking both disdain and misgivings.

But then, I was instantly snapped from my self-pity by what I thought I recognized as a familiar combination of rhythm guitar and falsetto croon emanating from the tinny speakers in the store’s ceiling. “Whaaaaaaaaaaaat?” I thought to myself, sounding in my head very much like Li’l Wayne pouring champagne on a Samsung Galaxy in that one commercial.  “I mean, this sure sounds like Daft Punk and Pharrell but sure they are not playing that in Nordstrom Ra- why, I’ll be. The sure as heck are….”

Nordstrom Rack feels like more of a Taylor Swift/Ed Sheeran scene than a Daft and Pharell scene.  But there they were, soothing my eardrums and threatening to make me lose myself to dance right next to the Max Studio blazers (which I got one, by the way.  Huge sale, super cute).  And I knew right then in that moment that it was all going to be OK.

It was like God was reminding me, through the insertion of my jammy jam into a most unexpected environment, that me going dress shopping mattered to Him.  It’s not that the dress itself was important- although it could be, God can use absolutely anything to move mountains (as evidenced by the way this most secular of musical pieces moved my heart to remember Him). It mattered because I was doing it and I matter to Him.  He was with me because He is always with me, lovingly holding even the minutiae of my life in His tender and all-powerful care, because that’s who He is and what He does for those He has created and called (that’s me and you, by the way. Even if you haven’t heard Him calling, that doesn’t mean He’s not calling).

So remember that today, as you go about doing whatever it is that you happen to be going about doing.  He’s with you because He loves you. The things you are doing matter to Him because you matter to Him.  It doesn’t have to feel like Super Important Kingdom Work or one giant leap toward His Great Purpose for You. He made you just as you are and He delights in You. You are precious to Him.  And whether you are serving the poor, weeding your yard (blech), or shopping for shoes or dresses or what have you, He is with you because YOU MATTER TO HIM. And now, jam out to some Daft Punk.